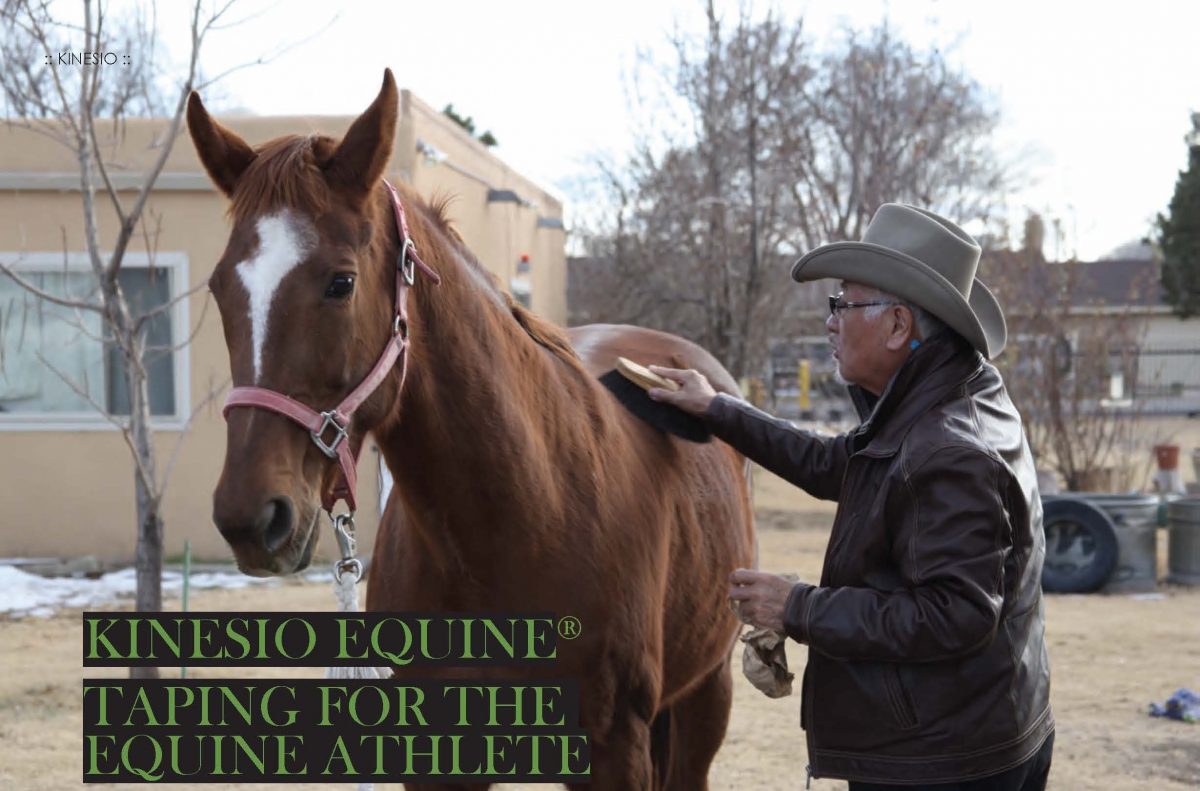 The scientific principles behind the functions and applications of the Kinesio Taping are similar for both humans and horses. Dr. Kase recently did a complete series of tapings on rescue horses in New Mexico. Kase pointed out that the animals with lots of hair did really well with the taping. “When you stimulate the hair, you also stimulate the skin and below the skin.”

Dr. Kase is having some amazing results with the horses he has taped. Red Sonja is the niece of Secretariat, and one of three rescue racehorses that Dr. Kase went to tape recently. The idea was to test some new variations of our Kinesio Equine® tape to see which version would stick the best. The high strung thoroughbred was a little bit jumpy at first: when Dr. Kase touched her back she flattened her ears and tried to move away from him. We could all tell that touching her back hurt her. Her owner explained Red Sonja’s back problems and that this caused her a lot of pain. After a few moments of talking to her, Dr. Kase started to place taping applications on her back and hind legs. Then he told us to watch as he applied the same pressure on her back again. Red Sonja stood calmly, no movement. He pressed down again, and again she did not move. It was clear to all of us that the tape was working.

What sets Kinesio Tape apart from all other tapes worldwide is how it is created, applied, and used. It is neither rigid nor super sticky and it moves with the muscles. The tape is made from material that is elastic and it protects and supports muscles. Dr. Kenzo Kase, chiropractor and the inventor of the Kinesio Taping Method said, “I believe in natural medicine.” The tape he developed is made of natural components. “Continuous stimulation on the skin,” Kase explains, “helps the stem cells to heal the injured muscles.” Kinesio Tape has now expanded the use of the Kinesio Tape to include equine athletes—mostly race horses and performance horses. Since 2011 KTAI has offered seminars on how to tape horses in Austria, the United Kingdom, Brazil and the United States. In 2014 a new product, Kinesio Equine Tape, will hit the market. This tape has been developed specifically for the unique needs of horse.

This premise behind the tape is based on the notion that if a person can lift the skin a little bit off the muscle, fluid can move more freely under the skin. This will help keep down inflammation and support the surrounding tissues. In many cases it helps with range of motion of various joints thereby making it easier to move those joints. If you are interested in learning more visit www.kinesioequine.com